Hiding in our houses will not help us achieve our goals. To become the craftsmen of our lives, we need to get on the road.

Mikel Kačinari (1925-2002) opened his own studio, Zlatar-Filigran, at 17 Vetrinjska Street in 1956. In the 18th century, the house was owned by leatherworkers, harness makers and a master cabinetmaker, and later by the Müller, Neger and Hertiš families. Mikel Kačinari, a skilled goldsmith, had the furnishings for the sales area and the reception room for customers made to his own design in 1965. It has been preserved to this day. Kačinari worked mainly with silver in the filigree technique, but also made objects out of gold. Mikel's children - Angjel, Lina and Klara - also took up goldsmithing and, after their father's retirement in 1998, Klara took over the business, which she still runs today.

Goldsmithing and silversmithing are among the most highly valued arts and crafts, because the metals from which the products are made (gold, silver) are so precious. It is a distinctly urban craft. The first mention of a goldsmith in Maribor dates back to 1436. Goldsmiths and silversmiths were mainly involved in the manufacture and repair of church utensils and furnishings, but in the 19th century they increasingly turned to jewellery making.

The Kačinari silver shop displays furniture, utilitarian and decorative silver objects (trays, vases, snuffboxes, boxes, bowls, etc.) and jewellery made by Mikel, as well as more recent products made by his daughter Klara. Since 2015, an exhibition of the Maribor Regional Museum has been on display in Kačinari Silversmith's Shop. The workshop is included in the project CRAFT PATHS which is a guided tour of historical artisan workshops.
Station 1 - Kačinari Goldsmiths 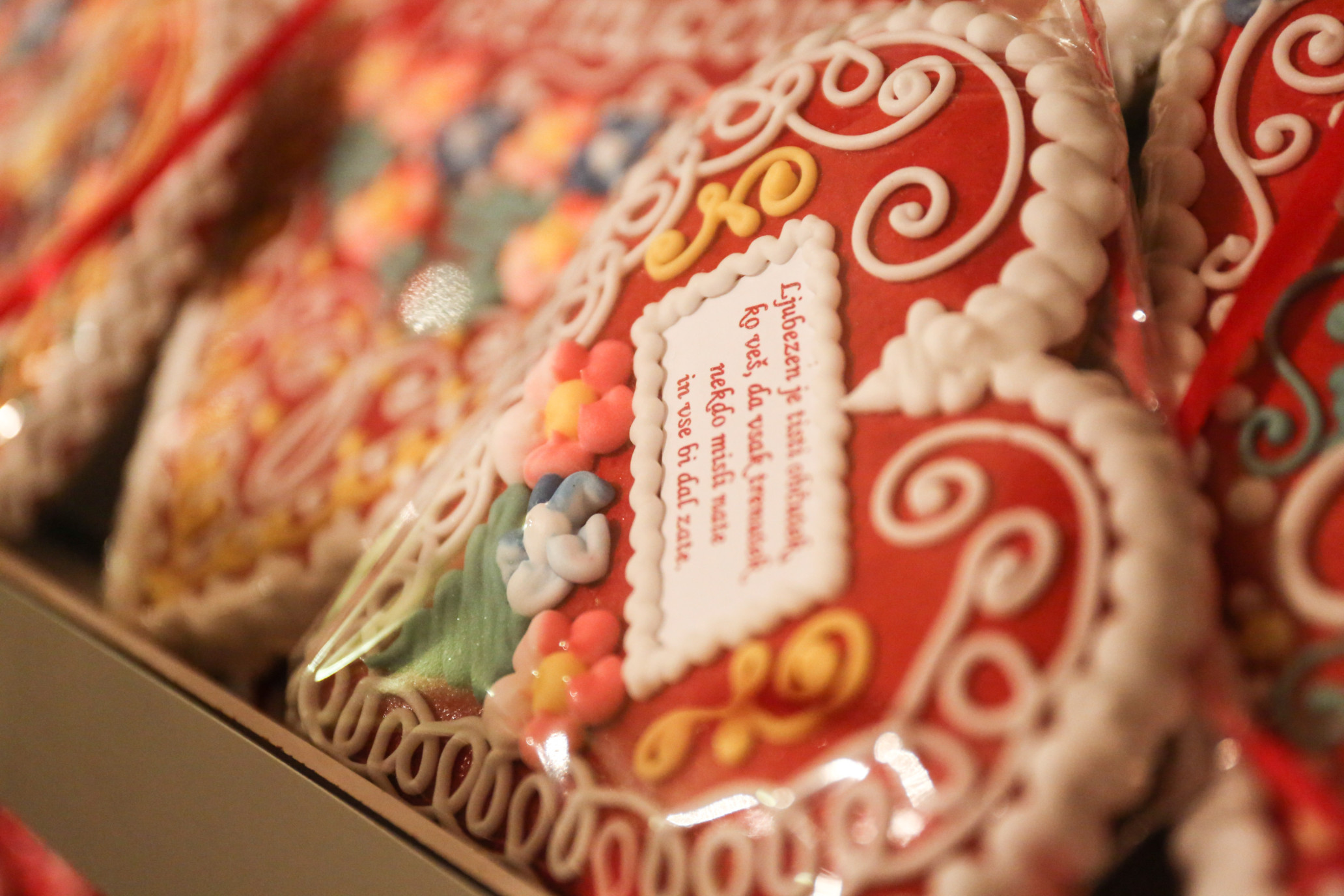 Station 2 - Licitar Shop Kolarič
Since 1951, the Licitar and Mead Workshop, founded by Pavel Horvat (1914-1981), has been operating at 5 Glavni trg. In 1981, it was taken over by Maksimiljan Kolarič (1931-2009) from Slovenska Bistrica, and after his retirement in 1993, the workshop and shop were taken over by his son, Beno Kolarič (b. 1963). He inherited his father's talent and love for the profession. At the age of seven, he decorated his first licitar heart, which he still does today. His wife Mira helps him with his work.

The crafts of licitars, mead-makers and candle-makers are among the oldest crafts in Styria and are distinctly an urban craft. It includes the production of mead (an alcoholic or non-alcoholic beverage based on honey), candles and pastries/biscuits made from honey dough in different shapes. The first candle-maker-waxmaker is mentioned in Maribor in 1378. There are also references to candle-makers-wax-makers in the 15th century and to licitars in the 18th and 19th centuries.

In the Kolarič shop, Beno and Mira make and decorate candles, honey-bread hearts, honey biscuits and, a few times a year, mead. There are old working tools on display (moulds for biscuit icing, candle moulds, tools, etc.). The master himself is a valuable source of information and loves to talk about his work.

Since 2014, an exhibition by the Maribor Regional Museum has been on display in the shop. It can be visited as part of the project CRAFT PATHS.
Station 2 - Licitar Shop Kolarič 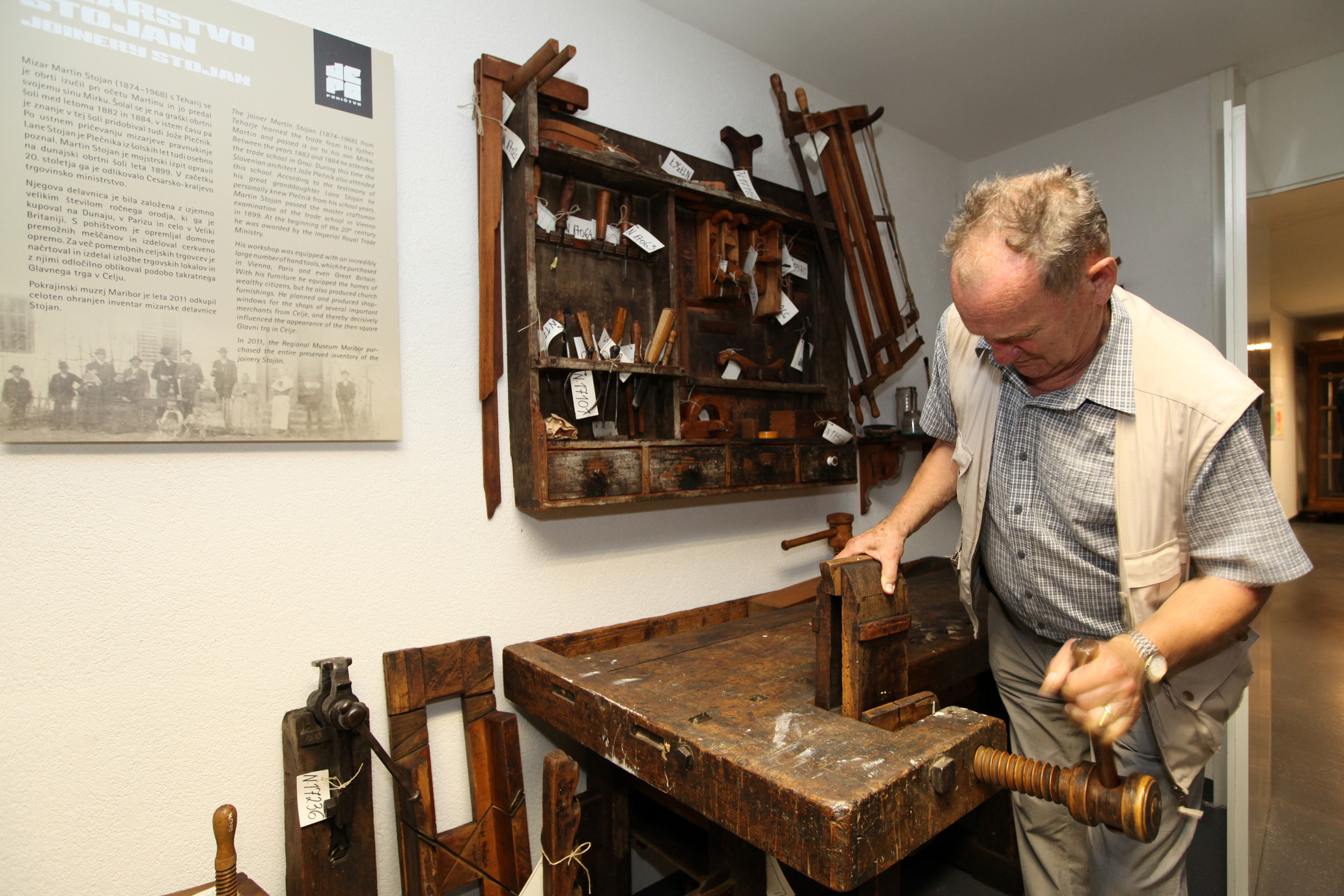 The workshop of the Teharje carpenter Martin Stojan (1874-1968) was stocked with an extremely large number of hand tools, which he bought in Vienna, Paris and even in the UK. He furnished the homes of wealthy townspeople and made church furnishings. He designed and made shop windows for several important Celje merchants and used them to shape the appearance of the then Main Square in Celje.
3rd stop - Stojan Joinery

Station 4 - Stove-maker's Workshop Heričko
In the first half of the 20th century, Pavel Heričko's (1866-1936) kiln workshop operated at 6 Kneza Koclja Street in Maribor. Heričko, together with the entrepreneur Schiller, founded a factory at the end of the 19th century for the manufacture of kiln and ceramic products. At the beginning of the 20th century, Schiller left the company and Heričko ran it alone. In 1914, he built new workshops and extended them in 1928. After his death in 1936, his wife Lojzka Heričko took over the management of the workshop. In 1959, production was abandoned and the business closed.

The baking trade includes the making of ovens and the installation, cleaning and repair of pottery kilns. It became independent from pottery in the 16th century. Pavel Heriček's kiln-making workshop produced kilns for bourgeois dwellings, villas and manor houses. His kilns were used by the Maribor magistrate's office, the pension institution, cafés, restaurants and spas. His stoves were made based on the sales catalogues that were available to him, and he also worked with various architects who drew up designs and plans for his stoves. Among them was Max Czeike, a Czech-born architect from Maribor.

In 2010, the Maribor Regional Museum bought the material from the former Heričko workshop from the heirs and set up an exhibition in the museum. The exhibition presents stove tiles and moulds from Heričko's workshop, his portrait and information about the craft. The exhibition is part of the CRAFT PATHS project.
Station 4 - Stove-maker's Workshop Heričko
Funders, sponsors, donors and partners:

In accordance with Article 37 of Regulation (EU) 2016/679 of the European Parliament and of the Council of 27 April 2016, we have appointed the following company as our Data Protection Officer:

You can find out more about which cookies we are using or switch them off in settings.

This website uses cookies so that we can provide you with the best user experience possible. Cookie information is stored in your browser and performs functions such as recognising you when you return to our website and helping our team to understand which sections of the website you find most interesting and useful.

Strictly Necessary Cookie should be enabled at all times so that we can save your preferences for cookie settings.

If you disable this cookie, we will not be able to save your preferences. This means that every time you visit this website you will need to enable or disable cookies again.

This website uses Google Analytics to collect anonymous information such as the number of visitors to the site, and the most popular pages.